Sarah Jordan was inspired to start Y.O.U Underwear on a trip to Uganda in 2016, where she came face to face with the problems associated with not having underwear. She saw the number of women and children who were being excluded from school, work and even their communities – especially during their periods – all because they didn’t have pants.

“Now that’s just not right,” she told us. “In fact, it made me really angry. But instead of getting my knickers in a twist about it, I started making underwear!”

And this is why Sarah decided to found Y.O.U Underwear on a buy-one-give-one model with Smalls for All®. This quickly became buy-one-give-TWO, and over 2018 and 2019, Y.O.U donated more than 3,550 pairs of pants to Smalls. One of Y.O.U’s main goals is to donate 23,000 pairs by 2023. Y.O.U stands for Your Own Underwear, because everyone should have exactly that!

Smalls is delighted to work with Y.O.U to help ensure the pants they donate get to the people who need them. As Sarah says, “Changing the world one pair of pants at a time!”

Find out more about Y.O.U here. 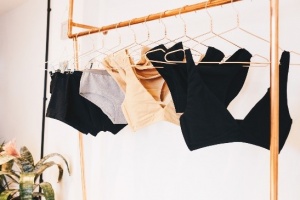 We’re appealing for donations of brand new pants for women, children and men in Africa and the UK who can’t afford or can’t get any. If you can help, please send us a pack today. To find out more, please see bit.ly/underwear-sfa. Thanks to our pantastic supporters, we were recently able to help the Little Green Sock Project – a new project in Trafford Manchester which is helping to support some of Trafford’s most vulnerable families. They provide emergency preloved children’s clothing bundles and ongoing clothing support to families in need, such as those escaping domestic violence, refugee families and families with persistent low income.Said co-founder Catherine D’Albertanson, “We wanted to include underwear in our bundles but being quite new, we didn’t have the funds to be able to do this for every family. We got in touch with Smalls for All to see if they could help. They sent us over hundreds of pairs of underwear in all children’s sizes. We can now send out underwear with every bundle!” Thanks so much for helping us to help them, Maria. #pantsappeal ... See MoreSee Less

Positive Pants Alert: we did it! 🙌 🥳Back in 2018, we set ourselves the ambitious goal of donating 23,000 pairs of underwear by 2023. We’re so, so proud to announce that, 6 months ahead of schedule, we've reached our target!Thank you so much for helping us reach this milestone, whether you’ve purchased from us, donated at checkout, followed us on social media or recommended us to a friend! Without you, we wouldn’t be able to change the world one pair of pants at a time.We also want to say a massive thank you to Smalls for All who do such incredible work improving access to underwear among those who need it most. Follow our donation journey at www.youunderwear.com/blogs/y-o-u-blog/positive-pants-we-ve-donated-over-23-000-pairs-of-underwear ... See MoreSee Less

“I haven’t been able to let go…” P’s message says. P’s mother died 16 months ago, shortly after having bought some new bras – the subject of this lovely note. P has kindly sent them to us at Smalls for All. “I haven’t been able to let go of them until now,” the note says, “But my mum would have wanted that these are not wasted.” Sadly, P didn’t include an email address so we can’t thank her or him personally. However, to all the Ps out there, thank you for thinking of Smalls at such a very sad time in your life. Please know that each kind donation will mean a great deal to someone when it reaches the end of its journey. For more, see – bit.ly/underwear-sfa. Thanks, Maria 🩲♥🙏 ... See MoreSee Less