Home > Who we are > Trustees and Board > Alan McCormick

Alan spent the majority of his career in the Aerospace and Defence industry.  At the age of 50 he moved into the third sector and took on responsibility for Mission Direct, a Christian charity that builds schools, medical facilities, safe houses and homes for some of our world’s poorest in 11 countries round the world.  He is passionate about supporting the vulnerable and those living on the edge.

Smalls for All® captured his heart after he witnessed the amazing impact that giving someone their own underwear can have.  Underwear not only restores dignity it allows the street kids to go swimming in public places, play football etc, etc. 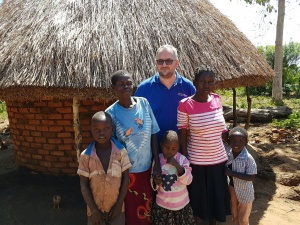 Your personal data will be stored safely and securely within Mailchimp, the vehicle we use to create our newsletters.

4 REASONS TO SHOP WITH Y.O.U THIS XMAS 🎁1️⃣ We make comfy underwear from super-soft Fairtrade organic cotton that is PETA-approved vegan2️⃣ We work with India's leading sustainable manufacturer so we know our undies are exploitation-free3️⃣ Across our ranges, we support various charities including Smalls for All and the Ajuma Foundation 4️⃣ We're the highest-scoring B Corp in the UK, proof that businesses can be a force for good. Shop better this holiday season.www.youunderwear.com ... See MoreSee Less

Times are hard for many this year, and an increasing number of people are struggling because they don’t have underwear. Can YOU help? We collect NEW pants and new or gently worn bras for people in need in Africa and the UK. Because dignity matters. Please buy and send a pack of pants to us at Five Sisters Business Park, Westwood, West Calder EH55 8PN. Or use our Amazon wish list [bit.ly/wish-sfa]*. You can help us make a real difference to someone’s life this Christmas. To find out more, please see bit.ly/underwear-sfa. Thank you! Maria 🩲🎁🙏 *If you get an Amazon error about the gift registry address, simply select ‘change’ and enter it manually – thank you! ... See MoreSee Less

We’re appealing for new pants to give more people in need the gift of dignity this Christmas. Can YOU help? We’ve been receiving more requests than ever before. We need brand new pants for women, children and men, as well as money to support our work. If you can, please send us a pack or donate a little money through CAF or text giving. To find out more, please see bit.ly/underwear-sfa and bit.ly/money-sfa. Thank you! Maria 🩲🎁🙏 ... See MoreSee Less

Why don't we "do" #BlackFriday? Because, if we did, we wouldn't be able to do the following:- donate brand new pairs of pants to the UK based charity @Smalls for All - make & donate period care packs to the staff of the ICU department at @Royal Derby Hospital - Plant a tree for every piece of wall art created, with us, via #Ecologi - Provide 20% off all bookings made at 6 weeks in advance of their shoot date- Gift £100 credit for our clients to spend on whatever they wish at their viewingOh, and support independent, local, businesses through using their services via our studio in #Belper some of which we'll be listing over the weekend incase you want to get an extra Christmas present or two sorted!Here come the hashtags...#boycottfriday #saynotoblackfriday #supportindependents #supportyourhighstreet #loveBelper #independentbusiness ... See MoreSee Less