Home > Who we are > Trustees and Board > Maria Macnamara MBE, DUniv (Open) – Founder

Maria launched Smalls for All® in 2010. She had worked in financial services for almost 20 years when, in 2004, she decided to try a different kind of holiday and spent three weeks working with children in an orphanage in Brazil. This encouraged her to volunteer in Thailand in 2006 and Ethiopia in 2009.

It was following her experience in Ethiopia that she decided to set up Smalls.

In 2016, Maria gave up full-time employment to spend more time running the charity, and her work has attracted some high-profile recognition. In 2015, former Prime Minister David Cameron named her as a ‘point of light’ for her work as a volunteer. In 2016, she was awarded an MBE for services to charity and women’s health in Africa. And, more recently, she was awarded an honorary degree of Doctor of the University by the Open University. 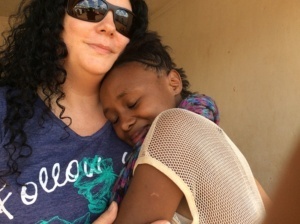 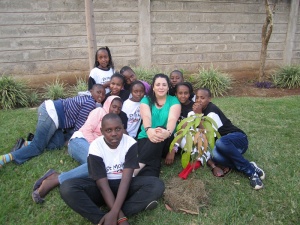 We need to keep topping up our supplies of pants to keep pace with demand, and we’re appealing for help. At Smalls for All, we collect new pants (as well as new and gently worn bras) for people in Africa and the UK who can’t afford or can’t get any. If you can help, please donate a pack of pants to us today. To find out more, please see bit.ly/underwear-sfa. Advance Charity support women survivors of domestic abuse and women involved in the criminal justice system. Thanks to our wonderful supporters, we’ve been able to supply them with much-needed pants. Interventions and Centres Manager Lydia Roberts said, “The donations provided by Smalls for All have proven to be essential for the women we support. Fleeing domestic abuse or exiting prison, women are often left with no resources and their basic needs are overlooked. Being able to access clean underwear from Advance’s Women’s Centres helps to build confidence, self-esteem and comfort in what can be traumatic life experiences. We’re now reliant on these donations, the underwear provided being the highest in demand for women in need accessing our centre.” Lydia was also able to share some feedback from one of their clients about the pants she’d received, “Brilliant, lovely and not baggy. They fit right and washed well. Really worth it. Underwear donations are really hard to find but these were amazing.”Thank you all for helping us to help them, Maria. #pantsappeal 🩲♥🙏 ... See MoreSee Less

Thanks to you, our pantastic supporters, 1,820 pairs of new pants and bras were picked up from us today by The School Bank West Lothian. The Bank supports children in families experiencing financial hardship by providing them with clothing needed for the school day. Underwear is of course an essential, and we were delighted to be able to help. If you, too, believe no child should be without pants, please pick up a pack of pants next time you’re shopping and donate them to us. Thank you! Maria bit.ly/underwear-sfa 🩲♥🙏 ... See MoreSee Less

“Now more than ever, there is a need to help each other where it is needed,” a recent letter from one of our supporters says. “Many of us take popping out to the local shops or having underwear for granted, and do not think of those that have to go without.” Huge thanks to her – and everyone else kind enough to donate – it’s hugely appreciated! If YOU’d like to help give someone the gift of dignity, please see our website for how to donate new pants, new/gently worn bras, or funds - bit.ly/get-involved-sfa. Thanks so much, Maria 🩲♥🙏 ... See MoreSee Less