The power of pants

Home > Why we do this > The power of pants

What your donations mean to people

Smalls for All® partners with Freedom from Fistula Foundation and Kenya Children’s Homes to reach some of the people who need underwear the most. Returning from a trip to Sierra Leone, Paul McNeil (who works for both organisations) shared his thoughts on the value of what we do, and what your donations of underwear mean to the people who receive them.

“Many people might think, ‘What’s the big deal with sending underwear to Africa?’ However, I can personally attest to the power of pants!” says Paul.

“We see many women and children who literally come to us with nothing. Many of the fistula patients we treat come to us wearing clothes that we have to burn because they’re so filthy. These are women who, through no fault of their own, have experienced prolonged labour, lost their babies as a result of this, and then found themselves incontinent – sometimes through both bladder and bowel (urine and faeces).

“They’ve had to discard much if not all of their own underwear because of the damage caused by this incontinence, and are often using matted rags in instead. The fortunate few who still have ‘underwear’, have to give it up when we bring them into our hospitals due to its unhygienic condition. So, when they’ve gone through successful surgical repair for their fistula, there’s nothing better than being able to give that woman a full set of clothing to go home in – which has to include some new underwear. Seeing their face light up, not only because they’re dry again but because they have clothing that helps to make them feel like a human, is a joyful sight.

“The impact of providing underwear is far greater than just handing over something that we very much take for granted.

“In a similar way, distributing kids’ underwear to our orphaned boys and girls is always a fun activity. The kids love to be able to pick their favourite colours, and you’d be surprised quite how proud a 5-year-old boy can be of his new spider-man pants!

“We’ll always have a need for underwear across our sites in Kenya, Malawi, Sierra Leone and Madagascar. And due to the generosity of Smalls and their donors, we sincerely hope we’ll continue to have a ‘pipeline of pants’.” 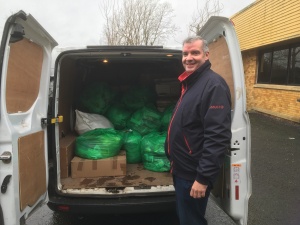 In 2019 we changed our constitution to also support those in the UK who have a need for underwear. Some of our pants now go to supporting people through, for example, school uniform banks, refugee centres, and charities and organisations that support the homeless.

Dundee International Women’s Centre (DIWC) supports migrants and refugees with health, social and educational needs as they settle into Dundee. Contacting Smalls on behalf of DIWC, Emma Wilson of NHS Tayside Public Health reported that, “Some migrant and refugee women living in our community here in Dundee are facing numerous barriers in accessing personal hygiene items, including underwear. Without meeting this need there are risks to the mental wellbeing, dignity and personal hygiene of these women, many of whom are not financially independent or have competing financial expenses. Thank you to everyone at Smalls for All for partnering with us to address an impact of Covid-19 that risked being hidden and unaddressed.” As part of an ongoing collaboration, NHS Tayside Public Health works in partnership with DIWC to address the health needs and inequalities where they exist within the Dundee migrant community.

Salma Hanif Gani, Family Learning Project Worker at DIWC, says, “I wanted to say a big thank you for your kind support for the vulnerable families that come to our Women’s Centre, it is difficult times for many just now. All at Dundee International Women’s Centre are so grateful to Smalls for All. It means a lot to the women who find it difficult to ask for help regarding these items.” 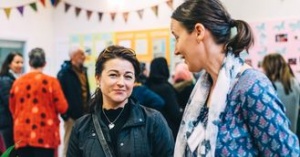 The Bethany Christian Trust focuses on relieving the suffering and meeting the long-term needs of homeless and vulnerable people in Scotland. On receiving 600 pairs of pants for people in its Rapid Re-accommodation Welcome Centre, manager Ruth Longmuir said, “We were delighted to receive this generous donation of pants from Smalls for All which will directly benefit our guests at the Welcome Centre. Clean underwear is something that most people take for granted but is far from certain for many people who are homeless.” 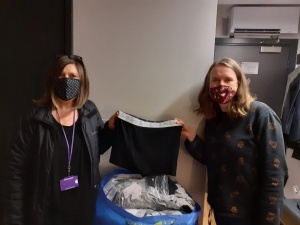 The Edinburgh School Uniform Bank aims to promote pride, dignity and self-esteem in children from families experiencing financial hardship. “Packs of new school uniform including pants are given out to families referred to us by other services, including school and social services,” operations coordinator Johanna Wesemann told us. “By providing good quality school uniform and other important clothing such as pants, we can ensure children living in poverty can attend school without stigma.” 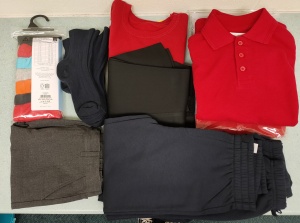 At Smalls for All, we always need new pants (as well as new and gently worn bras). Can you help? If so, please send us a pack of pants today, or use our Amazon wish list: amzn.eu/dVO8Cu4. To find out more, see bit.ly/underwear-sfa.Two Brews is a not-for-profit outreach charity who go out feeding and clothing the homeless of Manchester 7 nights a week. They provide support in getting them off the streets and into accommodation, and also provide food parcels to those in need of a little help now and again. Thanks to you, we were able to provide them with a supply of pants. Amanda Thompson said, “Without the contributions of everyone working together and supporting each other, we couldn't give the small things in life, like underwear, to those that need it the most... Thanks to Smalls for All for the donation of underwear, our guys’n girls here in the streets of Manchester were able to have clean underwear.” Thank you for helping us to help them, Maria. #pantsappeal ... See MoreSee Less

Smalls for All collects and distributes underwear to adults and children in Africa and the UK. In Africa, they help those in orphanages, slums, IDP camps, schools and hospitals. Underwear is a luxury some people can't afford but it can make a huge difference.To help tell their story, we spoke to Maria Macnamara Founder & CEO of Smalls for All: efraising.org/aUEZsNsewc#Causeofthefortnight #easyfundraising #fundraising ... See MoreSee Less

We’re excited to be featured as Easyfundraising’s Cause of the Fortnight. 😊If you’ve not signed up already, please do! – efraising.org/vmVF8qmpry. It costs you absolutely nothing and is a great way to raise funds for us when you shop online. During this fortnight, we’ll receive a bonus £1 donation for every new supporter that signs up. AND, to top that, all shopping donations raised will be doubled! Thank you, Maria 🩲♥🙏 #easyfundraising, @easyuk, #CauseoftheFortnight, @easyfundraising ... See MoreSee Less