Thank you for sending us a pantastic 2,094 parcels in June.

Thanks to you, our pantastic supporters, we were recently able to help Pass It On Trust Uganda (PIOTU) – a youth-led, volunteer-based non-profit organisation that promotes education for children to act as a tool of change in the fight against early marriage. Said PIOTU’s Jackie Bennett, “I have great pleasure in sharing with you some wonderful photos of when PIOTU charity distributed over 500 pairs of knickers to the most vulnerable in Uganda. The remaining amount will be distributed in July and August. The women and girls were truly grateful, as this is something that many cannot afford.” 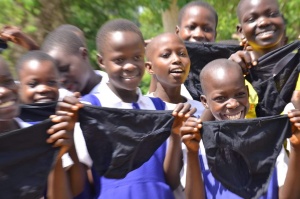 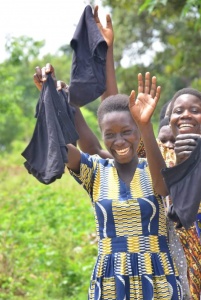 Last month we mentioned we had supplied underwear to Homeless Aid UK, a community group based in Bolton that operates all over the UK. Co-founder Billa Ahmed said, “We have seen a massive increase in the number of people who are homeless and living in poverty. The donations you gave will go a long way to help lots of people. Our service users love it when they get new underwear. Thank you once again for your support.”

One of the new ideas we’re trying out to raise funds is an ebay shop. We sometimes receive things specifically for selling, and often receive things we don’t collect, so an online shop seems the perfect solution to help us raise money towards our running costs and to avoid sending items to landfill. We opened the shop last month with some trial items, mostly swimwear, and I’m delighted to say it’s going well so far. We hope this will prove to be a good source of income, albeit a modest one. I’ve attached the link in case you want to have a look: ebay.co.uk/str/smallsforallafricaanduk

Thank you to everyone who has made an underwear or monetary donation to Smalls, we really appreciate your support.