Thank you for sending us a pantastic 2,318 parcels in September.

Days for Girls is one of the organisations we supply pants to – pants being an essential item for the hygiene kits they produce. We recently gave their North Herts team pants for kits they were making for a charity called For-Ethiopia, and the team were kind enough to share some of the feedback they’ve received with us:

Ally Ng from For-Ethiopia said, “I had the privilege of taking kits out to Ethiopia back in April of this year… We work in a rural area of Ethiopia that is roughly the same size of Gloucestershire. The majority of girls have no access to anything when they have their periods except using old rags, and as a result they skip school. The excitement when they saw the kits and learnt what this would mean for them was clearly evident. Due to suspected low iron levels due to the local diet, many girls do experience heavier flows so these kits will be really popular.”

Times are hard just now for many people for many reasons, but your continued support means we continue to support people in need of underwear. Donations are down, but we’re still receiving requests from organisations in Africa and the UK so thank you to everyone who has donated to Smalls this month. 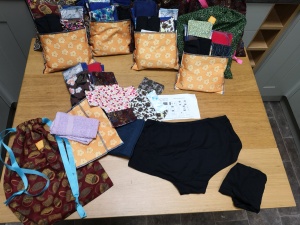