Thank you for sending us a pantastic 2,308 parcels in August.

I was saddened to hear of Queen Elizabeth’s passing on 8th September. Like many people, I’ve only ever known there to be a Queen on the throne and remember people celebrating her silver, golden, diamond and platinum jubilees – the most memorable being her silver jubilee when I was 8. I was so excited not just because our street was shut off for a street party, but because I got to eat lots and lots and lots of cake! And then of course her platinum jubilee with the famous Paddington video.

This year we’ve had 55 requests from organisations for underwear, 34 of them from organisations here in the UK. Baby Bank Scotland, a charity that supports families living in poverty, is one of them. We gave them 1,600 pairs of pants last month, with another 1,220 pairs to follow in October. Volunteer Jillian Thompson said, “Underwear is something most of us take for granted, it’s a basic element of the daily routine of dressing. Sadly, for so many children, underwear is often a ‘luxury’ their parents simply can’t afford! We try as best we can to include a new pack of underwear in each of our referral packs and the support from Smalls for All helps us make that happen.” 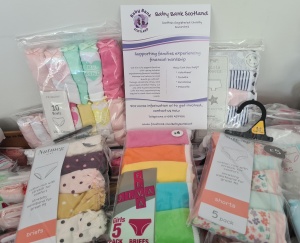 The number of parcels we received this month is higher than the previous 2 months – thank you so much to everyone who has donated. Sadly, demand for underwear from those who can’t afford or get any is as high as it’s ever been. Please keep supporting Smalls so we can keep supporting those people with little or no underwear.